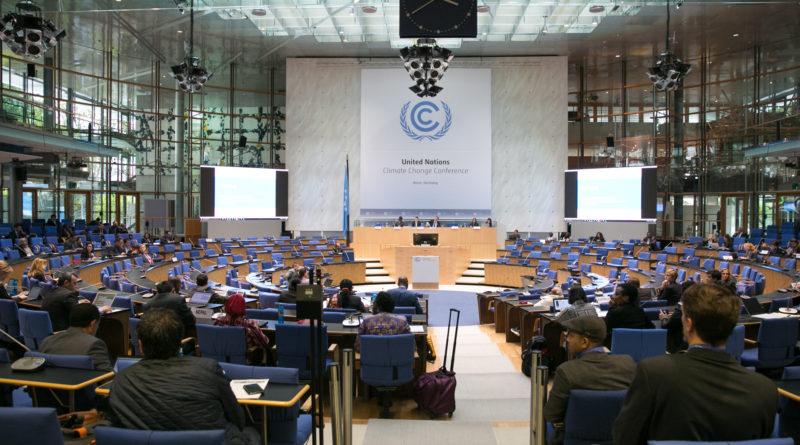 Photo by IISD/ENV | Kiara Worth

With President Trump withdrawing the United States from the Paris Agreement earlier this year, people on both sides of the environmental debate were anxious to see how the Bonn Climate Talks would go and hear what the United States had to say. The purpose of the meeting in Bonn was to work out the details on how to accomplish the goals set in the 2015 Paris agreement. However, there was a degree of concern over how cooperative the United States delegation would be.

The American government’s delegation, which consisted of fewer people than delegations for similar past events, contributed to the discussion and participated in the panels but stuck with the current administration’s political base and energy industry supporters by promoting coal, natural gas, and nuclear power. While their pro-fossil fuel ideas seemed to not be tethered to reality it was clear that the United States could remain a party to climate discussions on the international level without changing its individual stance on the issue.

Given the polarizing views on climate change within the country, it was almost no surprise that two American groups with very contrasting views appeared at Bonn. While Trump administration officials promoted coal energy for the future, an alliance of cities, states, companies and university from across America stepped up to reassure anxious countries that the majority of Americans were still committed to upholding the goals from Paris.

California Governor Jerry Brown led the democratic mayors and governors in reassuring the other countries that Americans remain committed to combatting climate change. Companies and universities addressed their plans for the future. One of the most notable was Microsoft Corp., with its proposed plan to reduce its carbon emissions by 75% by 2030. The company also presented ideas for sustainable technology for agriculture and land-cover mapping in meetings with foreign governments.

Overall, the status of the fight against climate change at the time of Bonn stays at “Meets Expectations” according to Andrew Deutz from The Nature Conservancy, an Arlington-based environmental group. Deutz cites the United States’ withdrawal from Paris, saying ever since “the U.S. took its foot off the accelerator, the risk of global climate action slowing down has increased.” However even if it isn’t to the extent hoped by environmental groups, concrete steps around the world are being taken towards achieving the goal set at Paris – maintaining overall global warming under 2 degrees Celsius. Hopefully, by the next meeting in Poland, more hopeful news will emerge and more progress will be made.

One thought on “United States at Bonn Climate Talks”