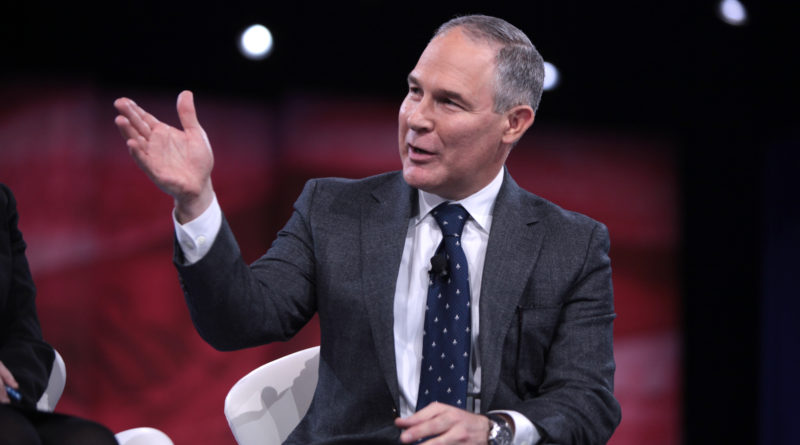 On Thursday, July 5, 2018, President Trump announced via twitter that Scott Pruitt, administrator of the Environmental Protection Agency, had submitted his resignation, effective July 6.[1] Pruitt’s resignation is another in a long list of over 30 high-profile resignations since President Trump has taken office.[2]

Pruitt’s departure from the EPA marks the end of a controversial term as advisor. There have been many questions regarding his official conduct as well his employment of resources. For example, his traveling was investigated as it was noted that he often spent taxpayer money on trips home. Also, he chartered a private plane and military jet at times instead of flying commercial as well as traveled first-class as opposed to coach because the “lashing out from passengers” potentially found in coach would “endanger his life.”[3] Other investigations showed Pruitt asking staff and assistants to run personal errands and enlisted expensive security for personal trips. Also, it was discovered that Pruitt potentially held “secret” meetings with industry reps out of the public eye and off the publicly recorded calendar.

In his resignation letter to the President, he says the “unrelenting attacks” on him and his family “are unprecedented and have taken a sizable toll on all of us.”[4] He will be replaced by Senate-confirmed deputy, Andrew Wheeler, on Monday. Andrew Wheeler is a former coal lobbyist and is currently the EPA’s deputy director.

While the President has expressed his confidence in Wheeler, Democrats feel otherwise, as Wheeler’s past clients include Murray Energy, which has dubbed itself “the largest coal mining company in America.”[5] Furthermore, Senate Minority Leader Chuck Schumer has, at the time of the confirmation hearing, called Wheeler “a former industry lobbyist who has worked on behalf of big polluters and climate change deniers.” It is concerning that Wheeler has “spent years working to undermine or lobby against the environmental protections” he will now oversee as EPA administrator. However, only time will tell if the following months will show progress or the same controversies present under Pruitt.