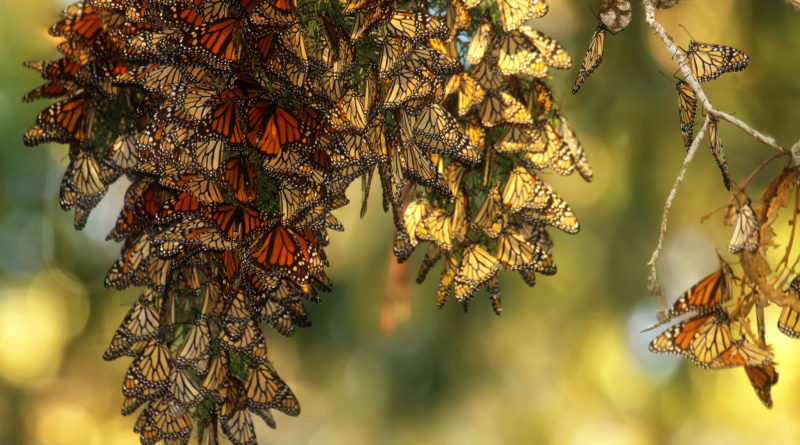 According to the World Wildlife Fund (WWF), “The monarch butterfly exhibits the most highly evolved migration pattern of any known species of butterfly or moth and perhaps any known insect.” Additionally, they pollinate flowers, support predators and parasites, and are indicators of healthy landscapes.

With the increasing effects of climate change, the ecosystem’s conditions, especially colder and wetter winters can be dangerous to monarch butterflies. Droughts and abnormal rain patterns may cause adult butterfly mortalities and change their migration habits.1

“Three factors appear to have contributed to reduce monarch abundance: degradation of the forest in overwintering areas; the loss of breeding habitat in the United States due to the expansion of GM herbicide-resistant crops, with consequent loss of milkweed host plants, as well as continued land development; and severe weather,” says one study from Hamilton College.2

Monarch butterflies migrate to central Mexican forests during the winter season. Studies have shown that approximately half of the butterflies in Mexico migrate from the U.S. Midwest.3 Unfortunately, in the Midwest there has been a decline in milkweed plants, which are monarch butterflies’ primary source of food. The decrease in availability of milkweeds is resulting from an increase in use of herbicides.

One study from Illinois provided “empirical evidence of a negative association between county-level glyphosate application and local abundance of adult monarchs, particularly in areas of concentrated agriculture.” Glyphosate is a key compound found in herbicides, which are responsible for the decline in milkweed obtainability for monarch butterflies.

The Environmental Protection Agency (EPA) has authority, under the Federal Insecticide, Fungicide, and Rodenticide Act (FIFRA) to determine what chemicals may be used in the United States. The EPA evaluates new pesticides and determines whether they are approved for use in specific areas, and then enforces these regulations. Herbicides containing glyphosate have been approved for use, despite the new correlations between its use and decline of certain species.

The Center for Biological Diversity and Center for Food Safety released a statement in July of 2016 legally requiring the U.S. Fish and Wildlife Service to determine whether monarch butterflies will be protected federally under the Endangered Species Act. The agreement states that a decision must be made by June 2019.

“An 80 percent decline points to extinction if we don’t act fast. Protecting monarch butterflies under the Endangered Species Act is essential to their survival, and will provide a roadmap for safeguarding their habitat and ensuring their recovery,” said George Kimbrell, from the Center for Food Safety.

“On top of the loss of milkweed in its summer grounds, logging of its winter home in Mexico has increased, a severe winter storm this spring killed millions of monarchs, and a mine now threatens the Monarch Biosphere Reserve. Endangered Species Act protection can’t come soon enough for this beautiful but beleaguered butterfly,” said senior scientist for the Center for Biological Diversity, Tierra Curry.

WWF is working with local communities in Mexico to protect the monarch habitat by “promoting good forest management.” It is important to protect this species because they are indicators for whether an entire ecosystem is healthy.