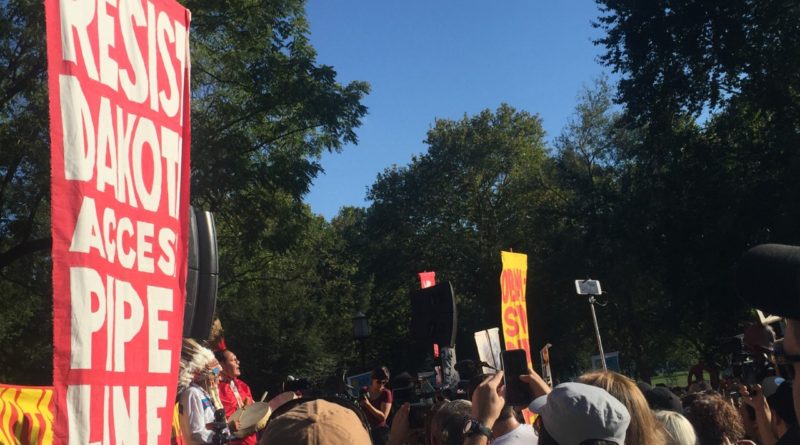 Less than a year since the Obama administration blocked the Keystone Pipeline, environmentalists are battling what many consider to be Keystone 2.0 (8). The 1,772 mile long pipeline would stretch from North Dakota to Patoka, Illinois, through sacred land of the Standing Rock Sioux Tribe (1). Dakota Access is projected to be in full operation by the fourth quarter of 2016, however this date is in question due to opposition from civilians, including farmers and Native American tribes, conversation and environmental groups, and three federal agencies (3).

The pipeline would be $33.7 billion project led by Energy Transfer Partners, a Fortune 500 natural gas and propane company and built by the U.S. Army Corps of Engineers (USACE). It would transport approximately 470,000 barrels of oil per day, connecting the Bakken and Three Forks production and supplying oil to a broader market (2)(3). Proponents of the pipeline argue that it would reduce the use of rail and truck transportation for crude oil, stimulate the local economy by creating jobs, and put the United States on track for greater energy independence (3).

Native American tribes living near the pipeline area, and across the U.S., have been fighting against the development of Dakota Access since it was first made public. The USACE first contacted the Tribal Historic Preservation Office (THPO), in accordance with the National Historic Preservation Act, in order to begin the permitting process in February of last year. The Corps published an environmental assessment in which it stated that it would avoid sites that are significant to tribe, however, the EPA and THPO has since deemed this assessment incomplete. The Standing Rock Sioux, represented by EarthJustice, sued the corps after they issued a permit for the pipeline this July 10.

Members of the Standing Rock Sioux tribe and their allies have been resisting the pipeline by setting up protest camps on sites where pipeline construction is set to occur (1). Soon after these protests began, Energy Transfer Partners sued tribal leaders for blocking construction (10). Friday was a turning point in this ongoing legal battle when the U.S. District Court for the District of Columbia ruled that construction on the Dakota Access pipeline would be allowed to proceed (6).

Almost immediately, the Departments of Defense, Justice, and Interior released a statement that Army would “not authorize constructing the Dakota Access pipeline on Corps land bordering Lake Oahe”, which is a critical source of drinking water for local tribes (5). The departments also asked Energy Transfer Partners to stop construction within 20 miles of the Standing Rock Sioux region until it is determined whether the construction is in accordance with the Environmental Policy Act (10).

In addition to the land and heritage of Native American tribe be stripped away, there will be serious environmental consequences if the pipeline is approved. The extraction and use of crude oil will contribute to greenhouse gases pollution and the oil and highly toxic fluid used for extraction has the potential to contaminate drinking water resources and local ecosystems (4).

Senator Bernie Sanders spoke about the potential impact of the Dakota Access pipeline in a Speech at a protest outside of the White House yesterday, “The group, Oil Change International, which is a group deeply concerned about the future of our planet found that the Dakota Access Pipeline would have the same impact on our planet as adding 21 million more cars to our roads (or) adding 30 new coal plants.”