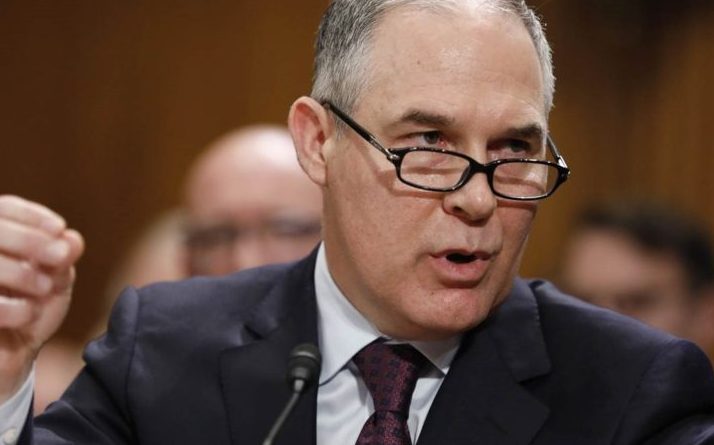 On Friday February 17, 2017 the senate confirmed President Trump’s nomination, Scott Pruitt, as the new head of the Environmental Protection Agency. Born in Kentucky, Edward Scott Pruitt began his career in 1998 as a member of the Oklahoma Senate. During his time he held the position as majority whip from 2001-2003. He also served as Republican assistant floor leader until his departure in 2006 to run an unsuccessful lieutenant governor campaign. Then in 2010 he was elected attorney general of Oklahoma (1). But it was during his tenure as Oklahoma’s AG that has received the most scrutiny.

Legal actions such as suing the EPA over the Mercury and Air Toxics Standards, which regulates the legal amount of pollutants, like mercury or cyanide, have environmentalists up in arms (1). Some fear the eminent threats Donald Trump declared against the EPA during his campaign. And this confirmation only reminds the public of the major alterations that are going to happen to the regulations that protect our health and environment.  The Environmental Protection Agency serves to protect human health and the environment through creating and enforcing federal regulations passed by congress. Some of their responsibilities include, “making our communities and ecosystems diverse, sustainable and economically productive” (3).

It’s an unfortunate contradiction that the man who has sued the EPA an astounding 14 times, and even dissolved the Environmental Protection Unit in the AG’s office is our EPA administrator (2). Now that he is confirmed in administration, it will be an interesting dynamic between the leader who believes climate change is “far from settled” and the many employees dedicated to stop global warming (4). In fact, he has even made statements criticizing the US’ “unnecessary” environmental regulations that have “drained billions from its economy” (4).

In an attempt to prevent this confirmation Democrats tried to push the vote until Pruitt’s emails were released. Although democrats ultimately failed, they did succeed in the release of his emails, which Pruitt has been avoiding for the past two years. His email dump this past Tuesday revealed Pruitt’s close relations with the oil and gas industry (5). The rest of his emails are to be released on February 26th.

So what does this mean for our future?

It is no secret that Pruitt has disagreed with past EPA regulations, he vows to “shift regulatory power back to the states and avoid overreaching the authority bestowed upon the EPA by congress” (5). He claims the agency and its regulations will be “both pro-energy and jobs and pro-environment” (5).

During his first address on Tuesday in his new position, the former Oklahoma AG discussed dealing with “important monumental issues with respect to our future and our environment.” Yet he was able to completely avoid stating any of his opinions on environmental issues like air and water protection or the regulation of greenhouse gases as carbon dioxide, which is central to the agency’s mission statement. Pruitt asserted, “The process we engage in adopting regulations is important, because it shows we take our role seriously” (2).

He added, “I seek to be a good listener, you can’t lead unless you listen.” (2). Only time will tell how Scott Pruitt will alter the EPA and the impacts it will have on our future.