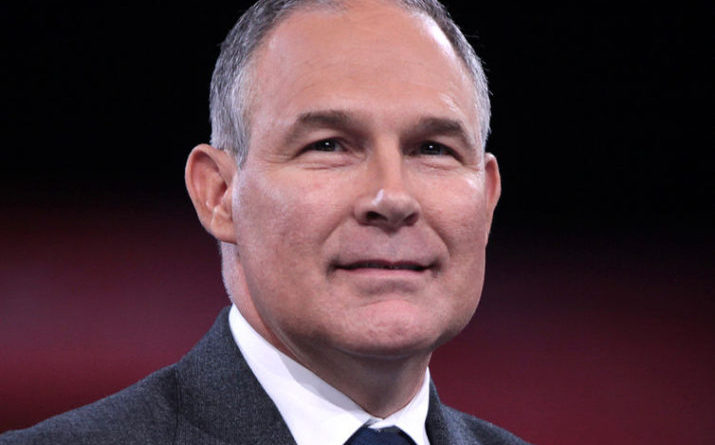 Pruitt presented his leadership approach to staff during his welcoming address, pledging to “listen, learn, and lead” and encouraged civil debate on key environmental issues. He failed, however, to take a stance on climate change and other environmental challenges, briefly stating “We can be both pro-energy and jobs and pro-environment.” Pruitt went on to forecast federal regulations as being tailored to benefit regulated parties, rather than to protect the public.

“Regulations ought to make things regular. Regulations exist to give certainty to the regulated.” Pruitt did not discuss policy specifics, only sharing his vision for an EPA that avoids litigation by limiting the agency’s ambitions under mandates given by Congress. He argued that the EPA had overreached its legal authority, stating “We avoid litigation, and we reach better outcomes.” Courts have rejected this argument many times in prior cases. The Massachusetts vs. EPA decision the Supreme Court ruled that, “Because greenhouse gases fit well within the Act’s capacious definition of ‘air pollutant,’ EPA has statutory authority to regulate emission of such gases (3).”

Over 6,000 pages of emails were made public the day after his speech highlighting Pruitt coordination with major oil and gas producers, electric utilities and political groups to roll back environmental regulations while serving as attorney general of Oklahoma. An Oklahoma judge ordered the emails be released in response to a lawsuit by the Center for Media and Democracy, which were previously documented by The New York Times in 2014 (2).

The emails include draft letters from companies to federal regulators in an attempt to block actions intended to regulate greenhouse gas emissions from oil and gas wells, air pollution and chemicals used in extracting fossil fuels.

Pruitt concluded his speech on Tuesday stating that he believes the EPA can be “pro-energy, projobs and pro-environment.” Environmentalists argue that is not the EPA’s job. The agency was created to focus on environment and human health concerns, and there are countless other clean energy job opportunities.

Pruitt’s statements and fossil fuel affiliations have caused widespread opposition among
environmental activists. The Obama administration entrusted the EPA to lead policy on global warming. Without rules to drive down emissions, America’s progress against climate change will be threatened and the country’s ability to meet emissions targets agreed to under the Paris Climate Agreement jeopardized.