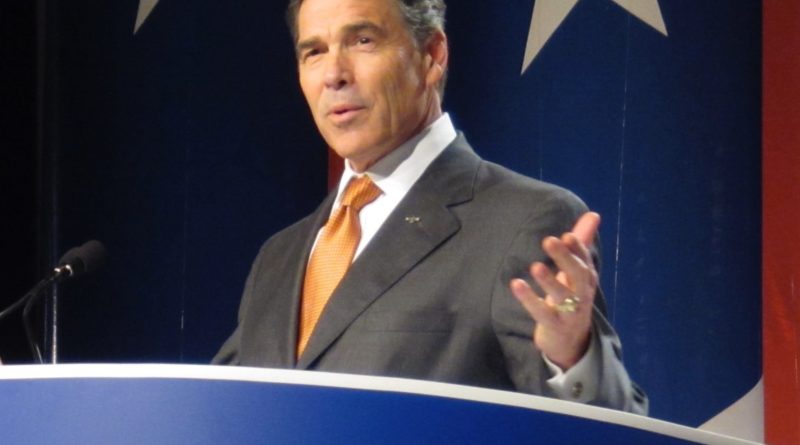 Several months ago, then President-Elect Donald Trump announced Rick Perry as his nominee for the United States Secretary of Energy. The U.S. Department of Energy is involved with US energy policies and safety with nuclear material. According to the department’s website, their mission is “to ensure America’s security and prosperity be addressing its energy, environmental and nuclear challenges through transformative science and technology solutions” (5).

Rick Perry graduated from Texas A&M University with a Bachelor of Science in Animal Science. He served as the governor of Texas from December 21, 2000 to January 20, 2015. Perry ran for President of the United States in 2012, when he infamously forgot the Department of Energy was one of the three federal government agencies he planned on eliminating (along with the Departments of Commerce and Education). He also briefly campaigned for president in the 2016 election, but struggled to finance his campaign.

In examining Perry’s thoughts on climate change, four main instances appear in which he has a publically addressed the subject. First, in 2009 Perry, then Governor of Texas, wrote a letter to Environmental Protection Agency Administrator Lisa P. Jackson urging the EPA to retract their announcement of greenhouse gases as a public health threat until “the EPA can definitively demonstrate the science and underlying data forming the basis for these actions is valid, uncompromised and replicable” (3). In this letter, he also states: “I vehemently disagree that these reports ever provided sufficient legal basis for the EPA to find that natural gases, such as carbon dioxide, present any danger to public health or welfare” (3).

In Fed Up!, Rick Perry wrote that climate change is “all one contrived phony mess that is falling apart under its own weight. Al Gore is a prophet all right, a false prophet of a secular carbon cult, and now even moderate Democrats aren’t buying it” (2).

In 2011, on the presidential campaign trail, Perry tackled the climate change subject in Bedford, New Hampshire. When questioned on global warming, Perry replied “I do believe that the issue of global warming has been politicized. I think there are a substantial number of scientists who have manipulated data so that they will have dollars rolling into their projects. I think we’re seeing almost weekly, or even daily, scientists are coming forward and questioning the original idea that man-made global warming is what is causing our climate to change” (1).

Finally, in his confirmation hearing for the U.S. Secretary of Energy, Senator Bernie Sanders (I-VT) questioned Perry, “I’m asking you if you agree with the scientific community that climate change is a crisis and that we need to transform our energy system to protect the future generations.” Perry replied, “I think that having an academic discussion, whether it’s with scientists or if it’s with you, is an interesting exercise. But do I have a record of affecting climate in this world and in this country? The answer is yes. When you lower carbon emissions by 17% and sulfur dioxide by 66% and NOx by 56%, don’t you think that’s a good thing?” Sanders was not impressed with his answers and stated that it would be better for him to recognize that climate change have a global crisis (4). Perry also stated “I believe that some of it [global warming] is naturally occurring but some of it is caused by manmade activity. The question is, how do we address it in a thoughtful way that doesn’t compromise economic growth?” (4)