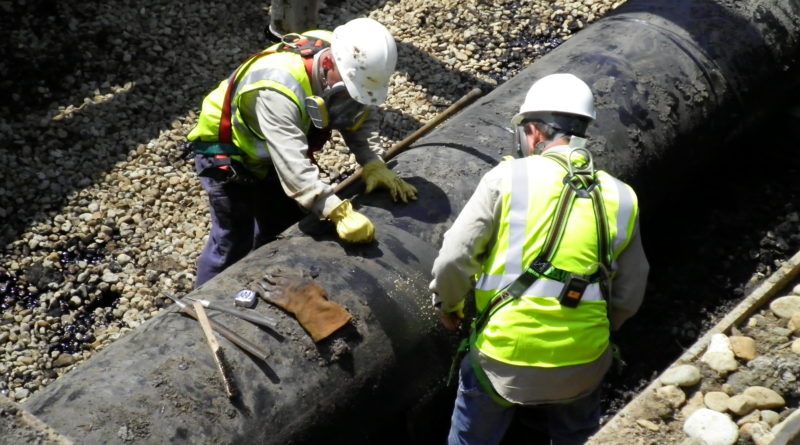 The order streamlines regulatory processes and eases environmental analysis, also declaring pipelines constructed within the US to be made with domestic materials.

While pipeline supporters promote economic boosts, opponents question its environmental impact.  Protesters have been in a long-term battle against the pipelines and the proposed routes which travel over Native American lands.

“By granting the easement, Trump is risking our treaty rights and water supply to benefit his wealthy contributors and friends at DAPL,” said Dave Archambault II, chairman of the Standing Rock Sioux Tribe. “We are not opposed to energy independence. We are opposed to reckless and politically motivated development projects, like DAPL, that ignore our treaty rights and risk our water.”

The proposed Dakota Access Pipeline will transport an estimated 7.4 billion barrels of crude oil from North Dakota through South Dakota, Iowa and Illinois, according to the US Geological Survey.

In addition, the Keystone XL pipeline will transport 900,000 barrels of tar sands oil more than 2,000 miles per day from Alberta, Canada to refineries near the Gulf of Mexico; cutting through six states, including Montana, South Dakota, Nebraska, Kansas, Oklahoma, and Texas.

Total output of emissions from producing, transporting, processing and burning the products will amount to a conservative estimate of 101.4 million metric tons of CO2e per year— the equivalent to 29.5 US coal plants or the average emissions of 21.4 million US passenger vehicles.  Environmental impacts caused by added emissions are also expected to cause $128 billion in social costs.

TransCanada CEO Russ Girling, says the project will create 42,000 jobs. Girling also said these jobs would be “ongoing.” Pipeline advocates, such as Senator Joe Manchin from West Virginia, support its construction stating “the country needs more jobs, and that is why I have always been a proponent of the Keystone XL Pipeline.”

However, the State Department estimated approximately 42,100 temporary jobs will be created over a two years construction period; once completed the number of permanent jobs that will actually be created is only around 50.  Adding insult to injury, the pipeline will take funding from sustainable energy sources that employ tons of permanent full-time labors.

The pipelines’ environment impacts are indisputable.  Production of tar sands oil emits three times the amount of sulfur dioxide, nitrogen oxides, lead, mercury, and other pollutants compared to gasoline.  To separate tar oil from sand, silt, and clay large amounts of heat, water and chemicals are required. It takes three barrels of water to extract one barrel of oil, and 95 percent of the water used becomes so polluted it must be stored in man-made pools, where it seeps through ground soil and contaminates local water supplies.

Warming global climate will elevate pipeline temperatures, causing corrosion that leads to oil spills. Every year pipelines’ spill over four million gallons of oil and hazardous waste, according to the Pipeline & Hazardous Materials Safety Administration. These instances caused an average of two deaths per year, resulting in over $263 million damages annually over the past decade.

Renewable energy is becoming ever cheaper to produce, leading to an influx of clean energy investment which now receives twice as much global funding as fossil fuels.  Thus, environmentalists argue the United States should instead commit to renewable energy sources, such as wind and solar power.