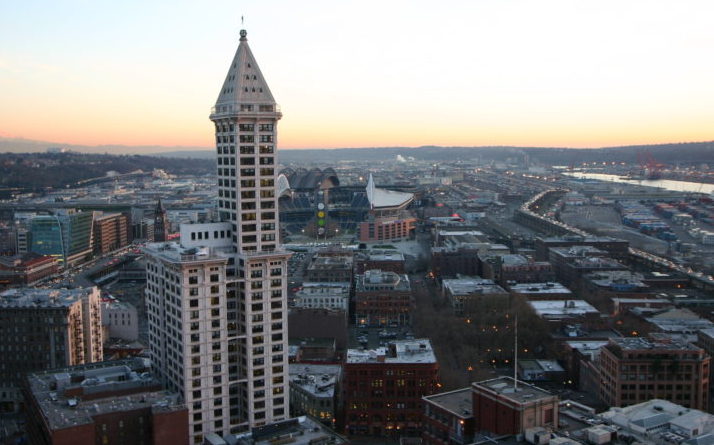 Photo by Christopher S. Maloney/CC by 2.5

A carbon tax initiative is on ballots today in Washington State. The initiative would set a tax on all carbon emissions in Washington and offset a portion of state sales tax. Despite being the first carbon tax ever proposed in the U.S. during a time of record atmospheric carbon dioxide concentrations, it has sparked a debate that is telling of the differences in values among of environmentalists, policymakers, economists, and citizens alike (5).

Initiative 732 (I-732) is unique in its strategy. The major efforts to put a price on greenhouse gas emissions have been primarily through cap and trade systems, such as that proposed by the Obama administration’s Clean Power Plan (4). If passed I-732 would be the first policy in the U.S. to equally charge emitters. The tax would start off at $15 per metric ton per year until 2018 when it will rise to $25. The tax will then rise gradually over time until it reaches $100 in 2016 dollars. Washington citizens would pay this tax in the form of a gas tax and a tax collected by electric utilities. The revenue generated from this tax would be put towards lowering the state sales tax by 1 percent, funding the working families tax rebate (WFTR), which provides low-income households with federal earned income tax credits, and would rid of the business and occupation tax on manufacturing (6).

Yoram Bauman, a PhD economist who is self described as a “stand-up economist”, leads the campaign for this initiative. In time after which many climate and environmental efforts have failed to gain federal support, Bauman decided to pursue action on the state level. Bauman also was intentional in developing an initiative that would easily gain bipartisanship support, so that if the initiative is successful, it can be replicated in other states no matter the political climate (5). However, in his effort to put forward an initiative that both sides of the political aisle would be able to get behind, Bauman has alienated many environmentalists (5).

Very early on, when Bauman was campaigning for the initiative to get onto the 2016 ballot, a Washington coalition of environmentalists, communities of color, labor unions, and climate-friendly businesses under the name of the Alliance for Jobs and Clean Energy, saw the initiative’s flaws (5). This alliance stands for climate action that actively involves communities of color and communities with low incomes in decision-making and for investment in these communities to build their resilience to the challenges of climate change (1). Since this organization initiates climate action that is driven by social justice and responsibility, they, and many other environmental organizations including the state’s Democratic Party and the Sierra Club Washington, have voiced that I-732 fall dramatically short of meeting the needs of all Americans (5,6).

According to a recent poll, showed that 41 percent of Washington voters are in support of the referendum, 37 percent are in opposition, and 21 percent are undecided (2). The majority of Washington state lawmakers, including current Governor Jay Inslee who is running for re-election, are opposed to the initiative (6).  However, many climate scientists have expressed their support for the initiative, arguing that the initiative, although not a complete solution, is a step in the right direction (3).