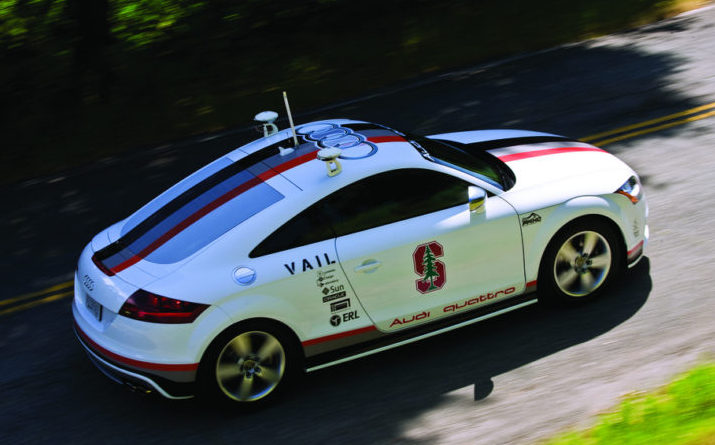 Autonomous vehicles have already been operating in the United States for several years. An Audi sports car with a trunk full of computers has driven the treacherous Pikes Peak road in Colorado while Google has cars navigating California’s roadways alongside human drivers in everyday traffic. [1] Most of the discussion of autonomous vehicles is focused on the lifesaving benefits of removing human error from the roadways, but there is another benefit that has major implications for addressing climate change, reducing vehicle emissions from everyday commuting. [2] The transportation sector generates 26% of all greenhouse gas emissions in the US. Autonomous vehicles have the potential significantly reduce those emissions. [3]

Efficient integration is the first obvious benefit for reducing emissions, fleets of networked vehicles automatically coordinating to optimize speeds, routes and merging, minimizing traffic jams, and keeping a smooth traffic flow.  Eliminating congestion and the associated frequent starting and stopping reduces fuel consumption and cuts down on overall driving time, benefiting both emissions and productivity of the passenger’s time.  Integration with traffic signals and devices allows for streamlining since the car can calculates the precise speed to get all green lights, a concept Audi is starting to test in Massachusetts this year. [1] In addition to saving lives and reducing property damage, preventing accidents reduces traffic jams and the emissions they generate [1, 4]

Integration of other segments of automobile infrastructure into networked automated vehicles offer further emissions reductions and efficient use of urban space.  Parking today often consists of driving around looking for an open spot, integrating parking structures allows the autonomous vehicle to navigate directly to a parking space, saving time and emissions.  Additional benefits can be found in congested urban areas where, without the need to open car doors for people garages can hold as much as 60% more cars, reducing the need for large structures and improving overall accessibility. [1, 4] Thus, automated parking could lessen the problems associated with urban sprawl in large cities, by reducing the space needing for parking lots.

Electrification of the auto industry will have substantial benefits for carbon emissions and is a likely consequence of introducing autonomous vehicles, led by ride-sharing services such as Uber and Lyft.  The main costs for ride-sharing companies are the drivers and the vehicles, replacing the drivers with autonomous systems drives down costs while opening up another seat for passengers.  Removing the drivers also allows the companies to source their own vehicles which they can do at lower cost through fleet operations and purchases.  Electric vehicles are the optimal choice because the cost to propel an electric vehicle an equivalent distance as a gallon of gasoline is about half the price of gasoline at today’s low prices, let alone higher prices expected in the future.  For climate change the benefits of electric vehicles are significant, coupled with a shift to renewable electricity generation a primary source of CO2 emissions can be addressed. [1, 5, 6]

Significant barriers to wide-spread electric vehicle usage are numerous, primarily split between range limitations and recharge times.  Tesla Motors, the most visible electric car company advertises the fastest recharge option currently takes 30 minutes to charge enough for 170 miles. [9] While that is sufficient for many commuters, it does not maximize the operating time needed for ride-sharing companies to invest in fleet operations.  Technology is solving this problem: electric rickshaws from Microtron Technologies features an ultra-capacitor based system that can cut recharging to as little as 16 seconds, that is currently being implemented in rickshaw fleets in Pakistan. [8] Autonomous vehicles will be a feature of the future transportation network, and with smart policy, regulation and market driven forces they can combine with electric propulsion to achieve major carbon reductions.

[6]  Mooney, Chris. “Why the Tesla Boom Could Actually Be Very Good News for the Electric Grid.” Washington Post. 15 June 2016.