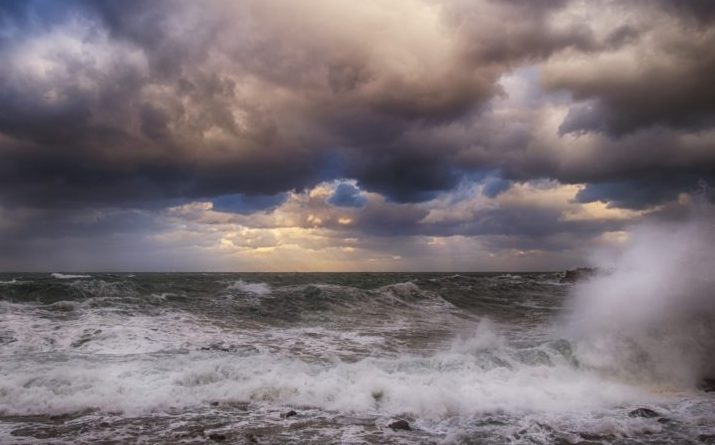 Most well-known regional climate oscillations are long-lived phenomena, with potential decadal lifespans [1]. These events significantly affect our climate system and accurate computer models have been created to project future impacts. Much more difficult to model are the intraseasonal oscillations (i.e. oscillations that occur multiple times within a season). One noteworthy example is the Madden-Julian oscillation.

The Madden-Julian oscillation (MJO) was discovered in 1971 by Dr. Roland Madden and Dr. Paul Julian. After observing 10 years of data over Canton Island in the South Pacific, Madden and Julian noticed strong wind patterns that recurred every 41-53 days [2]. They speculated that the observed oscillations were a widespread phenomenon centered in the mid-Pacific [2].

Since then, this periodic wind pattern the pair noticed has been rigorously studied. We now know that MJOs are intraseasonal oscillations that range from 30-90 days, characterized by the slow flow of warm air (~ 5ms-1) from the Indian Ocean to the Pacific [3,4]. MJOs are comprised of two convective regions of rainfall anomalies – one that enhances rainfall and another that suppresses it [5], shown in the figure below. 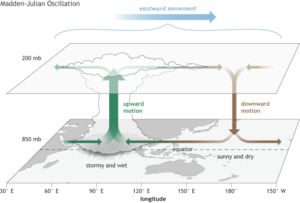 An illustration of the MJO dynamics. [5] 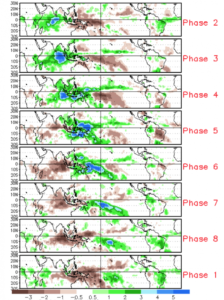 Herein lies the scientific intrigue of studying the MJO – each phase of its cycle has profound consequences on the climate and variability in rainfall all over the world, from monsoon regions in Asia [8] to the South American low-level jet [9]. And yet the MJO cycle may perhaps be most interesting to us because of its effects in our local vicinity. Scientists have found a direct correlation between the oscillations and above-average rainfall in the southwest United States [10]. This is a key finding for two reasons: 1) climatologists must now find ways to account for MJOs in their computer simulations (which currently have ‘significant problems’ [11]); and 2) climate change will drastically influence the future impact of MJOs.

While the MJO is a naturally occurring phenomenon caused by the interaction between the atmosphere and oceans [1], scientists expect stronger (though shorter-lived) [12] and more frequent [13] MJO events as a result of the warming tropics due to anthropogenic climate change. Some projections show a 7% increase in MJO occurrences in the western Hemisphere [11]. These are profound results, indicative of a concerning trend – large precipitation fluctuations can seriously limit crop production and food availability.

There are other, less understood effects of climate change on and by these oscillations, perhaps most notably with Arctic amplification. Arctic amplification is the multi-decadal trend of rapid surface heating in high latitudes and is one of the most noticeable indications of climate change. Researchers have found a relationship between enhanced tropical heating and Arctic warming shortly thereafter [14]. The warming phases of the MJO have occurred more frequently relative to the cooling phases over the past few decades, which, with the help of poleward-moving, heat-transporting Rossby waves, have helped contribute to rapid Arctic surface temperature rise [14].

The MJO is linked to the interseasonal El Niño-Southern Oscillation (ENSO) [15]. It has been suggested that the MJO’s association with global wind patterns could influence ENSO [15]. We do know that MJO activity is sensitive to sea surface temperature variations, especially in spring [16]. As stated earlier, climate change will likely result in stronger MJO events. While no link has been shown with data, a tentative connection between this enhanced MJO activity in spring and developing El Niño events could certainly be made.

Climate change could potentially have a major impact on the MJO, which could have damaging side-effects on many cities in the near future. The increasing power of the MJO unfortunately reminds us of a lesson we cannot seem to process – if we cannot slow the effects of climate change, we must face the consequences and learn to adapt to a less hospitable Earth.

[7] Matthews, Adrian. “Introduction to the MJO”. School of Environmental Sciences and School of Mathematics, University of East Anglia. 2016. Web. 17 Feb. 2016.

[9] Liebmann, Brant et al. “Subseasonal Variations of Rainfall in South America in the Vicinity of the Low-Level Jet East of the Andes and Comparison to Those in the South Atlantic Convergence Zone”. Journal of Climate 17.19 (2004): 3829-3842. Web.